Based on the book written by Abdul Halim Nasir which is currently being kept in the National Museum stated that before Sultan Muzaffar Shah I became the Sultan of Perak in 1525, they were Orang-orang Besar (local leaders) that governed every district in Perak.

One of the districts was Dinding, a Malay empire that was once very powerful in Perak. Dinding was previously known as Melayu Beruas Empire. 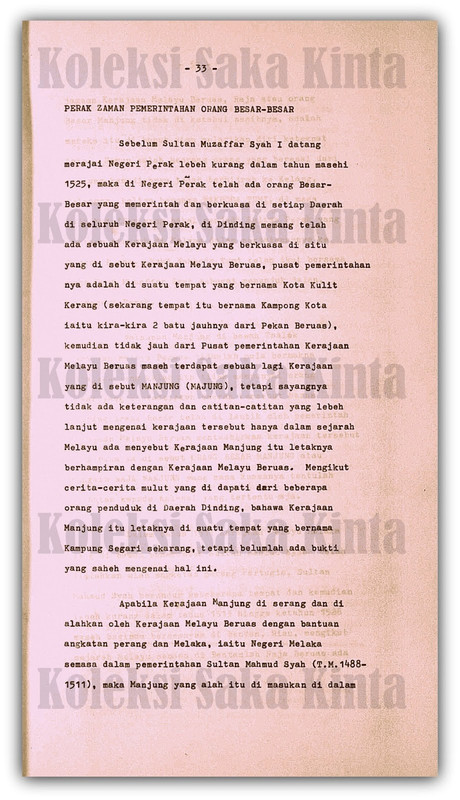 The other district mentioned in the book was Manjung Empire (Majung). Its central government was situated in the present Kampung Segari. When the Manjung empire was attacked and was defeated by the Melayu Beruas empire, Manjung was later put under the control of Melayu Beruas empire.

A sailor who had Manjung ancestry moved to Kelang acted as a guide to Raja Muzaffar Shah who later became the Sultan of Perak. The sailor in question was Nakhoda Tumi (Sailor Tumi). 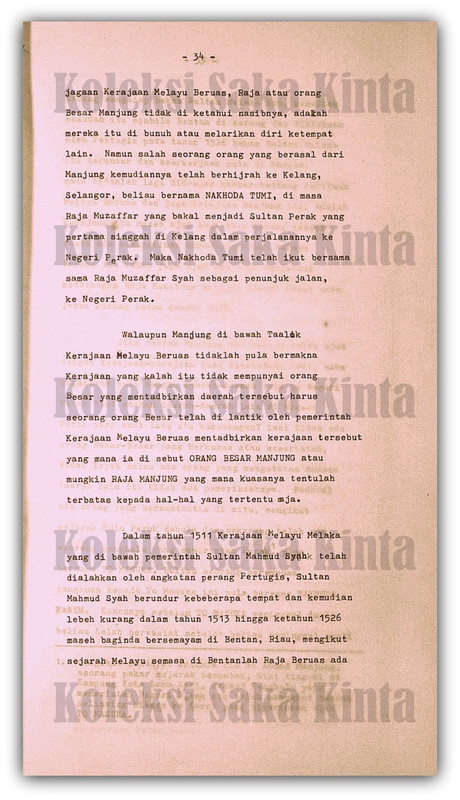 It should be noted that even though Manjung was put under the control of Melayu Beruas empire, the original government did not lose all its power. However, the power of Raja Manjung was limited and only confined to certain areas.

If the district of Manjung, Dinding and Beruas had their respective governance before the emergence of the Sultanate of Perak, how about the other districts in Perak?

It is utterly illogical if any historian or any individual to assume that there was no government in existence in the other districts as Perak itself is big state. 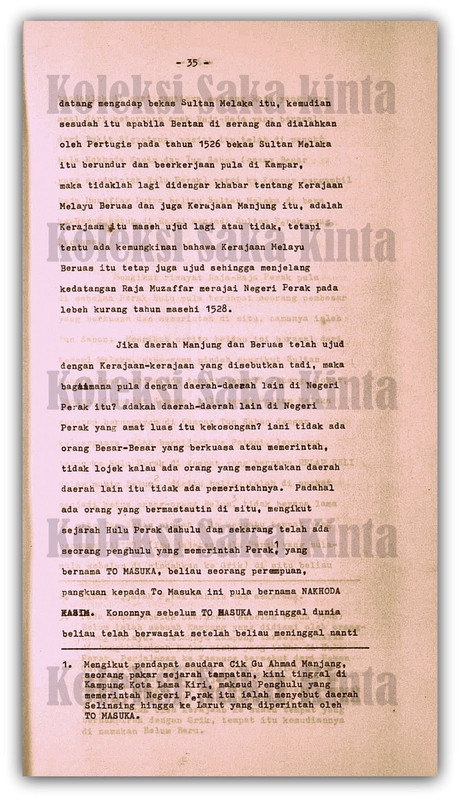 There was a Penghulu named Toh Masuka, a woman who had ruled over the district of Selinsing to Larutm Perak. She had left a will before she died stating that her successor shall be a Raja who will be a descendant of Bukit Si Guntang. 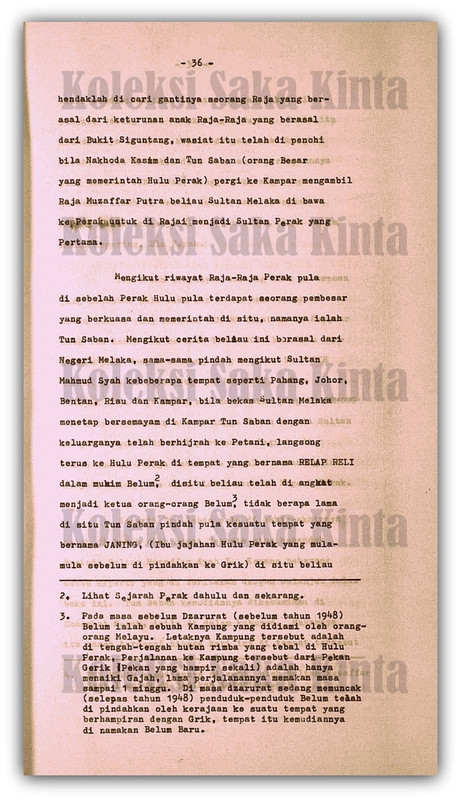 In the northern part of Perak, there was a place called Relap Rali, which located in the Belum division and Janing (the central government of northern Perak before being moved to Grik).

The place had a fortress that was built on the left side of a hillside situated near to Sungai Perak or better known as Changkat Merah. Changkat Merah was located in the middle of the forest in Kenering division where a leader name Tun Saban elected to rule. 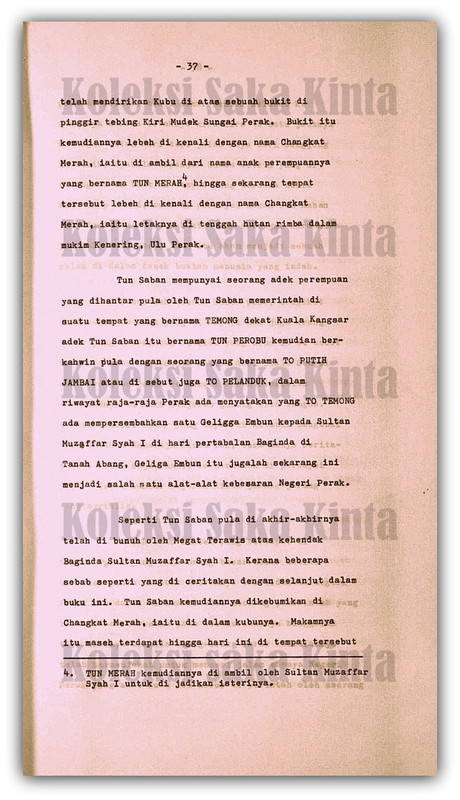 A leader was sent by Tun Saban to an area named Temong which located near Kuala Kangsar to rule. 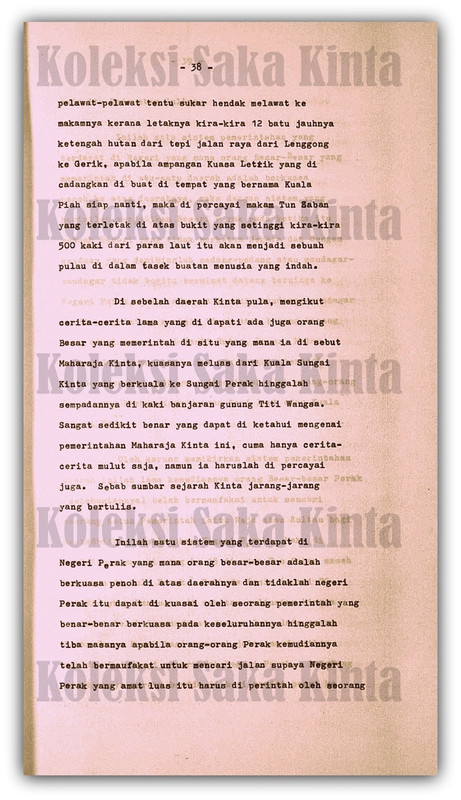 In the district of Kinta, a leader that ruled over the area called as Maharaja Kinta or Maharaja Genta. His power encroach from Sungai Kinta to Sungai Perak up to Banjaran Gunung Titiwangsa.

Pangkalan Pegoh, Kampung Kepayang Sungai Raia, Ampung Tambn, Ipoh and Tanjung Rambutan were one of the tin ores mining that were rapidly developed by one of the leaders in Perak. The leader in question was a descendant of Maharaja Kinta known AS Tok Sedewa Raja Abdul Wahab. His generations are said to still dwell in Buntong, Pengkalan, Simpang Pulai and Tanjung Rambutan. 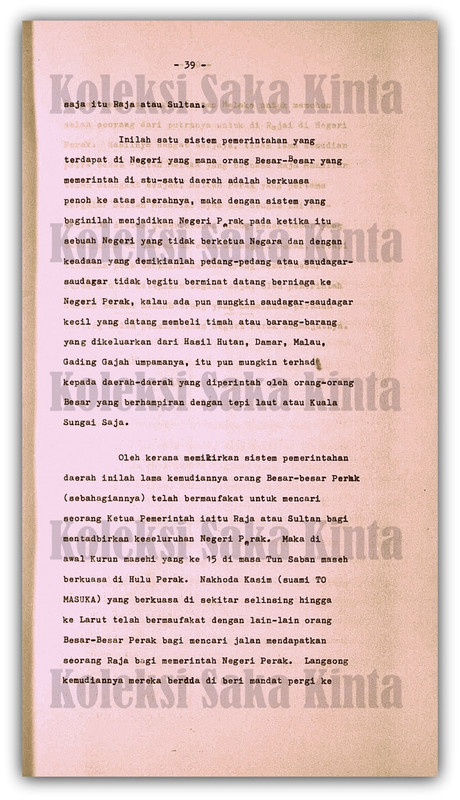 This is one of the government systems in Perak which allows the Orang-Orang Besar (leaders) to have autonomic power over their respective districts. 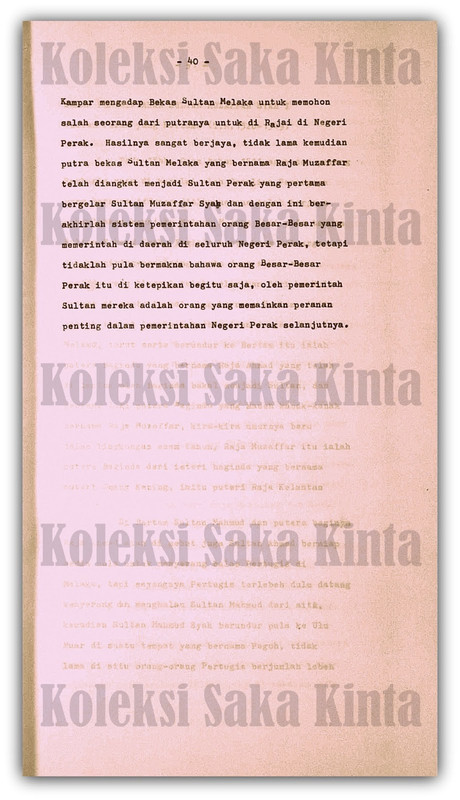 After Sultan Muzaffar Shah became the first Sultan, the reigns by the Orang-Orang Besar slowly faded away.

The Sad Story of a Loyal Wife Who Cycles Daily to...