In the effort of protecting Malay community, the ulemas, the religion leaders and local figures were said to possess outstanding ability during the era. There were two individuals who were always been related to the act of superstitious among Malay community which were ‘pawang’ and ‘bomoh’. There were also ulemas, religion and local leaders who acted significantly as a source of reference to seek for help and thoughts.

The religion leaders had played a prominent role in uniting the Malay which consisted of various tribes. This had become easier at early stage as the ulemas came from different backgrounds.. Some of them were from India, Arab and Indonesia which acted as the spirit lifter to fight in a period of time when Malay needed to face pressure and violence done by the communists..

The realisation of the nationalism movement, the violence of communists and the imbalanced division of economic had caused Malay community to search for alternatives to save their life. This was also getting worse as the sultans had lost their political influence and the death of some ulemas by the communists. The British also reported that the practice of immortality has begun since November 1945 at Negeri Sembilan. This practice had spread all over Tanah Melayu including Singapore. There was also a report from War Office which justify the success of ‘sabilillah’ in uniting the Malay as they were facing the pressure from the ‘Bintang Tiga’. 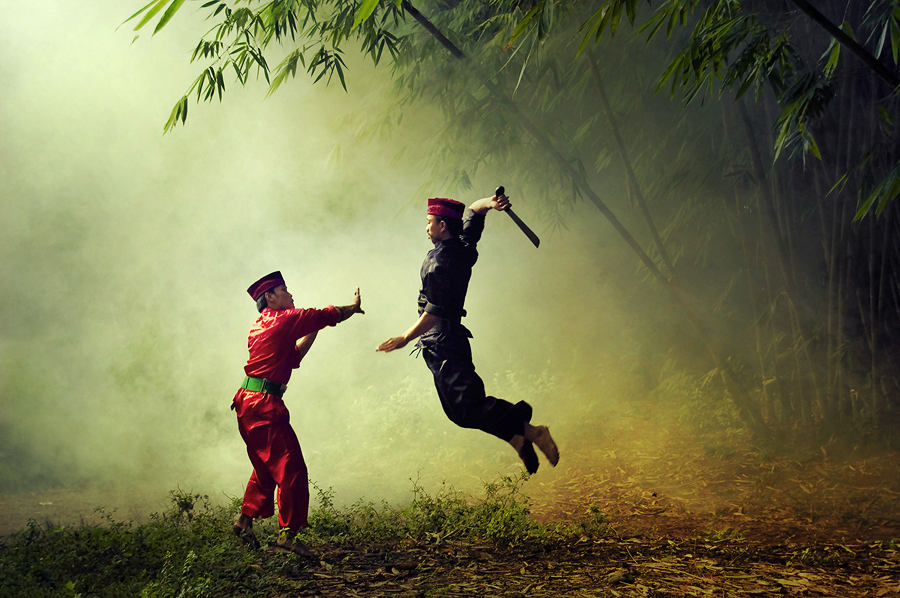 The violence made by the communists has caused the Malay villagers of Bekor Village to establish a group named “Kumpulan Parang Panjang”. They learnt martial arts such as pencak silat. Some of the figures that caught the villagers eyes were Ibrahim and Shaharuddin bin Yeop abdul Hamid. The Chinese were also not excluded to learn ‘kuntau’. A lot of ‘kuntau’ teachers stayed at Bekor. The mosques became an important spot to gather in the effort of uniting the Malay villagers. Some of the local leaders who were very influential were Harun bin Uda, Hassan. Harun bin Uda had gathered the villagers in mosques and also reminded them to work together against the communists.

There were also involvement from a few ‘syeikh’ from Bagan Serai such as Tuan Syeikh Osman. When the Malays were in pressure, one syeikh in Bekor had brought an immortal ring and acted as the fatwa deliverer in the line of ‘parang panjang’

There were also Malays who sold immortal bracelets to protect the life in Manong and Bekor area. Red scarves were used to enhance the spirit to fight. In the process of gaining inner energy in the practice of immortality, Al-Quran was the main pillar.

Different methods were used by the Malay community to ensure the survival of the race. The practice of immortality used by Malay community went hand in hand with the use of a few objects such as amulets and implant of gold needles. The gold needles will be inserted inside the blood vessels of the practitioners. Rings, bracelets and necklaces were used as a protection charm when fighting the communists. A report by British intelligence has proven that the charmed amulets were used as self- protection and were sold by Malays at Manomg-Bekor.
Rings were made from copper and were wore to protect themselves. These immortal rings were widely used in locations where fights between Malay and Chinese happened especially in Perak. Since ulemas possessed high knowledge, they were easily accepted by the villagers of Bekor. The teaching and learning process of immortal knowledge had increased the self-esteem of the Malay community to encounter the violence of communists. Ulemas, religion teachers and leaders were said to play an important role in spreading the anti-Chinese spirit.

In the middle of 20th century, the practice of immortality and mafia were used by Malays to defend themselves. The number of practitioners during the era was reported to reach thousands of people. The British who seemed not to be able to handle the current situation, assumed that the practice of immortality disturbed the stability and peace of the society. This happened since Malay community tended to rely more on ulemas and immortal practitioners rather than sultans and muftis.

The good deeds done by the ulemas, religion and local leaders couldn’t be denied in leading and also brought realisation to the community when they were threatened by the communists. Their exact number couldn’t be identified since it has become a tradition for them not to be too proud of themselves and stay humble. As for that, their knowledge were only able to circulate in a limited space of society in local level..

In the period of the first six months after the Japan gave up, there were negative assumptions among Malays and Chineses. This happened because when there were a fight between both races at Manik River, there were a lot of Chinese from Bekor trying to help the communists in that particular area. As a result, the attack had caused Malay to continue being discriminated. 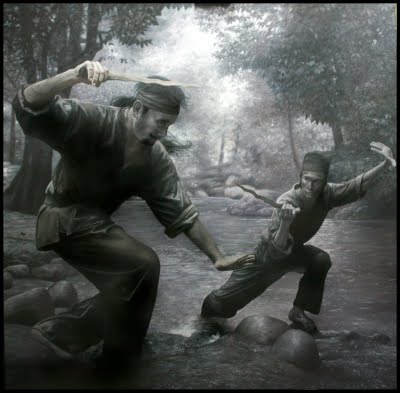 In addition, the ulemas and leaders had tried their best in implying good spirits to fight in the name of their religion. They had given out fatwas to fight, which it has become a compulsory for Muslims to protect their hometown if they were attacked by their enemy. This kind of matter had enhanced the strength of the community’s soul and went along with the spirit to fight. The relationship between the races in Bekor and Kelian had gotten worse. Almost every night, the sound of ‘tetuang’ used by Chinese to practice ‘kuntau’ could be heard.

The fight between Malay and Chinese which started on January 2nd 1946 caused a Chinese to be killed and the other 4 had gone missing in Bekor. Civil Adviser Officer (CAO) of Kuala Kangsar visited the place where the incident happened on March 4th 1946 dan conducted a meeting with leaders of Malay and Chinese. On the same night, 6 Chinese houses were burnt including Bekor Chinese School. The Chineses ran away and searched for protection at Ban Sin Loong Estate.

In another incident, 100 Chinese ran away without direction when they were chased by Malay after their crops were damaged when they were working on constructing a 6-feet road in the village. The construction were done without any permission from the villagers. The Malay villagers chased the Chinese to the incident place and got rid of them.

However, there was an approach towards peace which was done by Malay and Chinese volunteers. A meeting was held in Manong and it volunteers of ulemas and Chinese leaders presented. The Malay community came out with 3 claims in the meeting.

The first claim was to return back those Malays who were caught and brought into the forest. If they were killed, they need to show them the direction to their graves so that they’ll be buried based on Islamic ways. They also claimed back the property of the Malay community which has been confiscated by the communists. The third claim was to return all weapons such as shotguns which were kept by the government.
A few meetings at local level was also held between Bekor Village Head, Tuan Haji Muhammad Ali, along with the representative of Chinese in Bekor known as Ah Foi. This meeting was done upon the initiative of Sir Seedwell and Sir Catchfold. The cause of the attack on March 5th 1946 was a murder of a Chinese. A few Bekor Village villagers were said to use the chance to kill the Chinese when they were carrying rice sacks from Klian to Manong.

On the other hand, an incident which involved a few villagers to circumcise 2 Chineses who were carrying paddy to Manong town. One of them dove into the Nearby Perak River.

While the other one managed to ran away. There were also sources that said the cause of the fight was when a Chinese villager who was bringing his chickens to Bekor Village got murdered. The murder was done by Kassim bin Alang Mat Yasip.

The body of the businessman was thrown into the river and it got stuck at Perak River. The body was found by a Chinese and they then carried the body across Bekor Village road.

On today’s modern world, many think that these stories are just myth and were made up by Malay community in the past. Since there were no strong evidence that can tell the story unless it was told by the elderly which was told by the older generations, these knowledge is no longer be inherited to the next generations and now it has almost disappeared by time.

However, this story should be read by all for the sake of remembering and acknowledging the sacrifices made by the Malay community in the past to protect and stand for their own rights and so that the history that we were once being colonised would not be forgotten.